The Akashic Records are an ancient energetic record or database of every thought, emotion, feeling, word and action ever to exist, is existing or will exist. Imagine it as the consciousness cloud or like an energetic Internet to which you naturally have a connection to and you just need a browser, which is where having an Akashic Record access prayer like the one I teach in my Akashic Enlightenment classes comes in and the technicians like myself who are given access prayers and easy access to it so we can teach others how to use it at this time for their own soul evolution.

The Akashic Records are more commonly known as the Book of Life and referred to in the Bible as such as well as in many pop culture appearances. For instance, the 2003 movie Bruce Almighty featuring Jim Carrey and of course Morgan Freeman as God has Freeman show Carrey the record of his past actions of his current life. Freeman slides a drawer out of a massive white filing cabinet full of records of Carry’s life up till now and and searches through the files looking at each one of everything he’d done as a kid or ever said or thought about certain people. 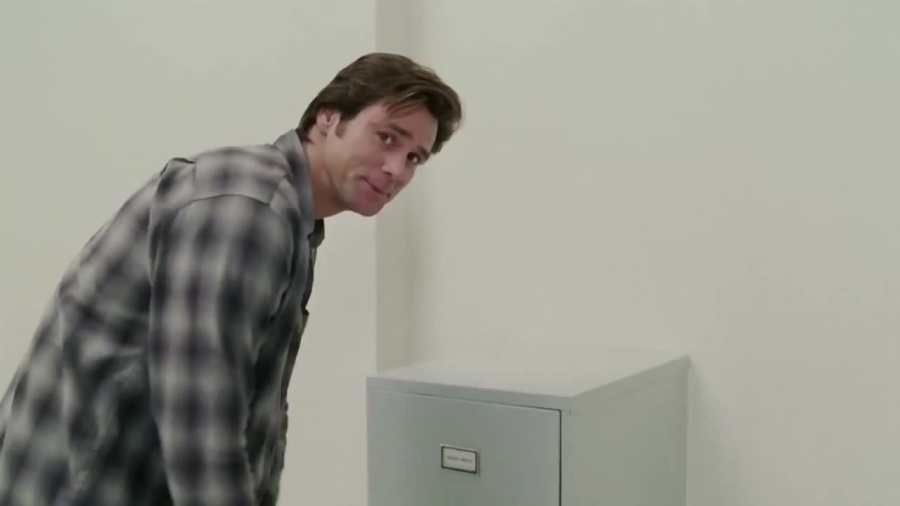 He now offers Carrey a chance to take the “enlightened” road in such future situations. So by God, as Freeman, revealing to Jim Carrey the record of his past behavior in certain situations in that life he now has a chance to redo this from a more soul aligned or enlightened state of being now that God has shown him is misdoings.

Another great movie to envision how the Akashic Records work on the larger scope of reincarnation or one life repeating lessons, is seen very clearly in the 1993 movie Groundhog Day featuring Bill Murray. Such a hilarious and great movie. 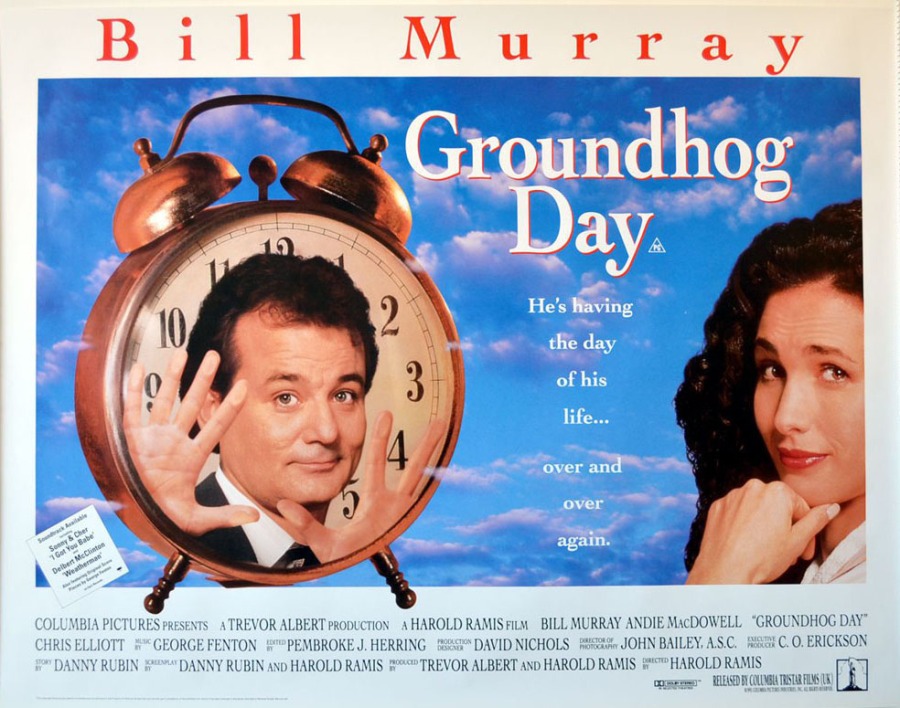 Murray’s character is a man who gets stuck in one day that keeps repeating until he learns the lessons he is to learn about being a more responsible, conscientious and loving human being which then he is released of to move forward in his life. Access to the Akashic Records would have been a great resource to that situation as that situation is an example of how our many lives or situations in one life repeat things until we fully grasp the message, understand it, change our behavior to a higher state of being and can finally move on from the lesson to our higher soul path and alignment. In this movie you can really see how it would be helpful to be able to take a peak at where we just aren’t quite seeing the big picture and thus continue digging ourselves that hole we keep falling into until, finally, we get it and move on to a higher way of living, which Murray’s character ultimately does represented in helping others and surrendering to true love as opposed to being in service to self and basing love on getting and filling his own hole of loneliness. (Haha the song Addicted to Love by Robert Palmer played on my iHeart80s radio app just as I wrote that. Higher Love by Steve Winwood played right after that. Thanks Universe for that synchronistic sign and example of what following a soul aligned life is like and sharing that songs and lyrics are the other great teaching tool!)

Another fun pop culture movie reference is 50 First Dates where due to amnesia Adam Sandler’s character has to get Drew Berrymore’s character to fall in love with him over and over again because every morning she wakes up and forgets everything.

This more or less shows what it’s like for soul mates or twin flames and how they know they are meant to be together but the ego mind, karma and repeating patterns of this life and past lives keep coming into play to block true love until the soul call to be together keeps one trying and breaking through the karmic loops to ascend to a higher level of unconditional love relationship. The Akashic Records are what record such actions or where they can be seen and accessed to accelerate such a process in a current lifetime. Thus by using the Akashic Records for this higher knowledge one won’t have to go through the cycle of reincarnation or painfully repeating the same pattern to the point of often causing one partner to choose free will out of the soul aligned connection as facing their soul’s work becomes too painful, scary or too much work however will only repeat in another situation until it is learned and ascended beyond. Accessing the Records at such a time can bring much needed relief and healing to such a situation.

This same idea can also be seen clearly in the television series Lost except on a higher level. (If you have not seen the show don’t read this as it is a spoiler.) The characters are put together to bring to the surface for each other exactly what they are struggling to relinquish in their Earthly human existence so they can come to a greater consciousness of it, release it and find peace and move on.

This show is more or less how the Akashic Records work when you read them, like in the show when they do their flashbacks as two people in current time on the island are interacting they will flash back to early moments in their lifetimes of how this moment they are in now came to be and why and how they are acting it out now to resolve it.

You see now, then as you ask about a certain situation in the Akashic Records you will be taken to different parts of the life of the person who’s Records are being read that created this now current moment and/or situation you are in presently and why and what is to be learned and how to best handle it so you can move on in the best way possible, karmicly, or so as to step out of karma altogether. This is more or less what being “lost” on that island was doing in the show Lost. It was giving each of them a chance to lose their Earthly baggage, to rise above it to a higher consciousness and higher vibration, which the island naturally had a higher vibration thus allowing this acceleration just like the Akashic Records do.

At one point, one character in the Lost series, Desmond, actually wakes up when on the island and starts being able to see the karmic game they are all playing and starts helping the others wake up by being able to see how his past actions created the present. Through his now awakened consciousness he is able to get glimpses of the future now to avoid certain things from happening or how they happen, except for death as that is something already divinely written as a higher purpose. So you could say Desmond becomes a natural Akashic Record reader where he is psychically plugged into the Records all the time present while spontaneously given divine Akashic Record insight when corrections need to be made for the higher good or soul evolution of himself and those around him.

Desmond starts getting flashes in time.

Desmond wakes up in the past while in the present telling the past version of Charlie things yet to come because he’s already there now looking back, because he’s now awake.

Desmond tells current time Charlie he’s seen a vision of the future and death is coming for him.

Desmond survives the consciousness jumping by having a constant…his love, Penny, the one person he truly loves and who truly loves him…showing how we all need each other.

This is a bit what it’s like to read the Akashic Records, plus if you are psychic on top of reading the records that will give you an extra boost to see forward. Keep in mind the future can change course as one enacts free will, in other words follows their ego instead of their soul or the part of themselves that is connected to all that is, God/Source, but one soul’s destiny is just a matter of when and how one chooses to accept it, get it and move forward.

The A Course In Miracles text also refers to this same idea Lost did of how our actions and working with others brings us along our soul’s destiny and road back “Home”, to God/Source. In the introduction of the book it states “our brother’s needs become our own, because they are taking the journey with us as we go to God. Without us they would lose their way. Without them we could never find our own.” And the way this book looks at clearing karma and following your soul’s destiny or your soul’s way back to God/Source is through forgiveness. “…in this world, forgiveness is a necessary correction for all the mistakes that we have made. To offer forgiveness is the only way for us to have it, for it reflects the law of Heaven that giving and receiving are the same…Forgiveness is the means by which we will remember. Through forgiveness the thinking of the world is reversed…Forgetting all our misperceptions, and with nothing from the past to hold us back, we can remember God. Beyond this, learning cannot go.” The forgiveness is seeing that the root cause of another’s actions, thoughts, words, or emotions are often based in learned egoic behaviors or patterns, or a reaction to another’s, and through accepting this person’s free will to live in that pattern, forgiveness is extended. Although this forgiveness extended is done so without becoming a doormat as that only creates an unhelpful compromise not allowing the other a chance to step out of the pattern they are playing out thinking it is real when it is not. If they choose to continue, that is their God given right of free will and as you extend love through forgiveness of their free will brings love, acceptance and ascension above your own free will.

In the Akashic Records all time is at the same time, meaning past, present and future are all now. Thus accessing the past affects the present and future simultaneously. Accessing the past can range from this life to lifetimes including Egypt, Atlantis, Lemuria, the Angelic realm, other planets, ancient Mayan civilizations or as a soul who was a soul part of famous healers and teachers like Jesus or Buddha and more. The point here is to learn knowledge of who you really are at a soul level, learn from past mistakes and/or why what is happening now in relation to it to clear it or be inspired by it and/or be motivated forward. Knowing who you really are and what you are really capable of now that you’re remembering who you really are as that original soul part of you that is as pure and part of God/Source and thus connected to everything.

Accessing your Akashic Records and just being in them is a very good way to step out of the control of one’s ego mind and really step into a place of humility and grace through higher consciousness to all that is. It is also a great place to just sit in quietly and absorb the high vibration energy as it is healing Divine energy and helps raise your vibration or resonance, thus calms your mind and nervous system like meditation does, allowing you to live your most divinely authentic awakened self.

Lastly, here is a pretty good documentary that includes some mention of Akasha and Akashic Records.